Titans Out On Dont’a Hightower

The Titans aren’t buying the notion that Dont’a Hightower is serious about leaving the Patriots. So, they have taken the logical step of removing themselves from the Hightower sweepstakes, Albert Breer of The MMQB tweets. Things can always change, but right now they are planning on putting their energy, focus, and money in a different direction. 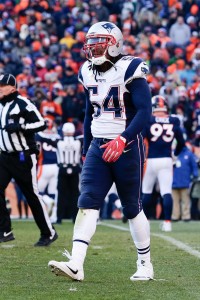 Non-rush linebackers don’t typically cash in on the open market, but Hightower is excellent at what he does and figures to be an exception. Although the Pats declined to give him a franchise tender worth roughly $14.7MM for one-year, he could still get eight figures per season on a multi-year deal.

In order to get that kind of money from New England, he’ll first have to get a similar offer from another team. Right now, the Titans and Jets don’t believe he’s sincere about leaving the defending champs. He’s now slated to visit with the Steelers, however, and that’s a team that would be of interest to any player serious about winning.

The Titans, meanwhile, will continue to roll with Avery Williamson and Wesley Woodyard as inside linebackers in their 3-4 scheme. Both defenders graded as top-50 ‘backers in 2016, according to Pro Football Focus, and Tennessee reportedly holds the 25-year-old Williamson in especially high regard.

13 comments on “Titans Out On Dont’a Hightower”