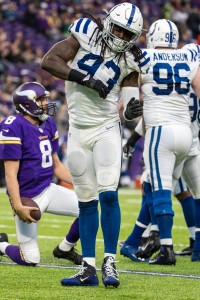 Walden indicated last week that the Colts wouldn’t be re-signing him, an unsurprising decision given that Indianapolis is attempting to get younger on defense (new general manager Chris Ballard told veteran safety Mike Adams the same thing). Walden, 31, signed a four-year deal with the Colts prior to the 2013 campaign, and ended up appearing in 60 games for the club. After averaging only four sacks per season from 2013-15, Walden put up 11 quarterback takedowns last year, but still graded out as one of the six worst edge defenders in the league, according to Pro Football Focus.

The Titans have already gotten out of the race for inside linebacker Dont’a Hightower, but Walden would give Tennessee a veteran presence on the edge. After playing more than 70% of the Colts’ defensive snaps a year ago, Walden would serve in a rotational backup role for the Titans, who already employ Brian Orakpo and Derrick Morgan. Tennessee ranked 14th in the NFL in adjusted sack rate last year.