Saints free agent guard Tim Lelito is on a visit with the Titans today, a source tells NFL.com’s Ian Rapoport (on Twitter). Lelito previously visited the Lions but left Detroit without signing a deal. 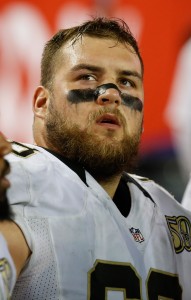 With many of this year’s best interior offensive linemen off the board, I have Lelito ranked as the third-best center or guard still available. The 27-year-old (28 in June) appeared in all 16 games last season and has only missed one regular season contest in his four years with New Orleans. He graded out No. 49 guard in the league last season, according to Pro Football Focus. PFF gave him a solid mark for his pass blocking with a less impressive score on running plays.

The Titans lost Chance Warmack (Eagles) and Brian Schwenke (Colts) in free agency this year, so they could use some reinforcements. Currently, the Titans project to start Quinton Spain and Josh Kline at the guard positions with Sebastian Tretola and Josue Matias in support. Spain was PFF’s 18th best guard last season while Kline finished 26th. If he signs with Tennessee, Lelito would likely become the top guard off the bench.

One comment on “Titans Meeting With G Tim Lelito”