The Bengals have acquired defensive end Chris Smith from the Jaguars, per a team announcement. Jacksonville will receive a 2018 seventh round pick which could go up, depending on certain conditions. 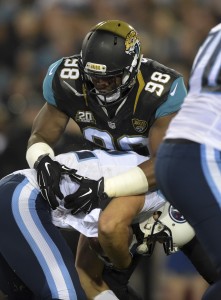 Smith has appeared in 19 games for the Jaguars since being drafted in the fifth round in 2014. Over the last three seasons, he has a combined 4.5 sacks and 19 tackles. Most of those sacks came during Smith’s rookie campaign.

At 6’1″, Smith doesn’t fit the typical mold of an NFL defensive end, but that doesn’t necessarily bother the Bengals.

“If that guy is 5’11” and he can get there, I don’t care,” defensive coordinator Paul Guenther said of smaller bookends earlier this offseason (via Paul Dehner Jr. of The Enquirer).

The Bengals now have five defensive ends under contract in Carlos Dunlap, Michael Johnson, Will Clarke, Wallace Gilberry, and Smith. There already has been some D-Line shakeup this offseason with Margus Hunt and Domata Peko leaving via free agency and the draft could bring further changes.