DeShone Kizer is still on the board as we head into Day 2, but he might not be available for long. Kizer is in play for the Packers at No. 33, Ian Rapoport of NFL.com (on Twitter) hears. Meanwhile, there’s a “lot of smoke” about the Chargers taking Kizer at No. 38, according to Vincent Bonsignore of the Los Angeles Daily News (Twitter link). 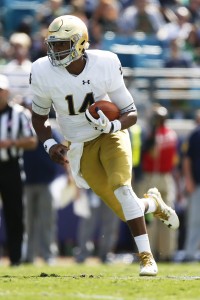 There were three quarterbacks drafted inside of the top 12, but Kizer did not hear his name called in the following 20 picks. The Notre Dame product was once viewed as a top five candidate, but concerns about his field vision and decision making hurt his stock in the months leading up the draft. Teams like the Browns and Saints both passed up opportunities to take Kizer even though they were in search of a quarterback and that’s not a glowing endorsement for him.

Still, Kizer’s big arm should entice someone to draft him in the top half of the second round. If the word around the Packers is to be believed, then they are at least considering the idea of tapping him as Aaron Rodgers‘ understudy.