The Panthers have signed defensive tackle Kawann Short to a five-year extension, the club announced today. The new deal is reportedly worth $80MM, tweets Adam Schefter of ESPN.com, while $35MM is fully guaranteed, per Ian Rapoport of NFL.com (Twitter link). $20MM of that guarantee comes in the form of a signing bonus, reports Mike Florio of Pro Football Talk (Twitter link). 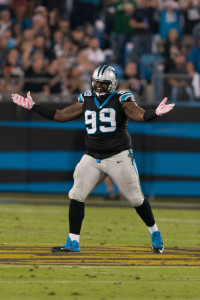 Short had been assigned the franchise tag, meaning the two sides had until July 15 to work out a long-term deal. He’d expressed a willingness to sign his franchise tender, which would have paid him a fully guaranteed $13.387MM for the 2017 campaign. After staging a short holdout during Carolina’s OTAs in 2016, Short had no plans to use similar tactics this year. The Panthers, of course, rescinded cornerback Josh Norman‘s franchise tag last offseason, but a similar situation won’t play out this year, as Short is now locked up through 2021.

Now earning $16MM annually, Short places third among defensive tackles in yearly salary, just behind Ndamukong Suh and Fletcher Cox. He’ll earn $40MM over the first two years of the deal, tweets Florio. The extension also likely clears a bit of cap room for the Panthers, who won’t be forced to carry Short’s ~$13MM franchise tag on their books in 2016. Any signing bonus included in the pact can be prorated over the life of the deal.

Short, 28, played on nearly three-quarters of Carolina’s defensive snaps in 2016, posting six sacks and grading as the league’s No. 3 interior defender, per Pro Football Focus. The 2015 Pro Bowler has earned positive marks during all four seasons he’s played with the Panthers, grading out as an excellent pass rusher from the inside.