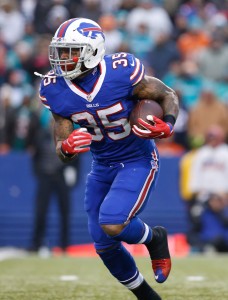 The Bills surprised many in the football world when they assigned Gillislee an original round/right of first refusal tender, which would only entitle them to a fifth-round pick if they did not match an offer sheet. For another $1MM or so, the Bills could have placed the second-round tender on Gillislee and that probably would have kept every potential suitor at bay. Gillislee averaged an NFL-best 5.7 yards per carry on 101 attempts as LeSean McCoy‘s understudy.

Williams, 25, was eclipsed by Jay Ajayi in Miami last year. Ultimately, he finished out with 35 carries for 115 yards (3.3 yards per carry average) and three touchdowns. Although the Dolphins would like to keep him, they would be able to get by just fine with Ajayi and Kenyan Drake holding down the RB position. They can also replenish the RB group in the late rounds of this year’s draft.

It’s fair to wonder whether the Patriots’ interest in either player is sincere. Already, the Pats have free agent addition Rex Burkhead, Dion Lewis, James White, D.J. Foster, and Branden Bolden on the roster and LeGarrette Blount remains available. The Patriots could be taking a real look at guys like Gillislee, Williams, and Adrian Peterson, but they could also be faking it to put additional pressure on Blount to re-sign. It doesn’t sound like Blount has much of an outside market for his services, so that could be an effective strategy for New England.