The Redskins have agreed to terms with free agent linebacker Zach Brown, according to Ian Rapoport of NFL.com (on Twitter). The deal is pending a physical. Brown signed a one-year deal worth a maximum value of $4.65MM, including a $500K signing bonus (Twitter link).Brown was once said to be seeking a multi-year pact in the $6MM range, but this isn’t a bad outcome for an April signing. 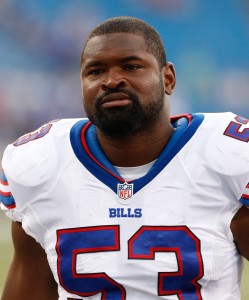 Brown, one of only four PFR Top 50 free agents who were unsigned going into Monday, was linked to several clubs in recent weeks. Ultimately, it’s the Redskins that are coming away with him, but the Raiders, Dolphins, Colts, and the incumbent Bills all showed varying levels of interest. The Raiders and Dolphins were said to be the two finalists for Brown, but word later leaked out that the Fins were not likely to sign him. The Colts may have backed out after adding fellow linebacker Sean Spence.

The Redskins have starting linebackers Mason Foster and restricted free agent Will Compton returning to the fold this year. Brown, it seems, will come in as an upgrade over Compton. Compton ranked as the No. 74 linebacker in the league last season, per Pro Football Focus, while Brown placed 17th.

After racking up 149 total tackles, four sacks, and two forced fumbles for the Bills last season, Brown entered March with hopes of cashing in. Ultimately, his age and lack of history as a top quality ‘backer hampered his market and limited his list of suitors.