Even after learning Tony Romo has chosen retirement over Houston (or any other NFL club), the Texans don’t view Jay Cutler or Colin Kaepernick as “strong options” for their quarterback vacancy, according to Jason Cole of Bleacher Report (video link). 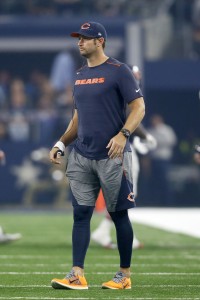 Cutler, for his part, doesn’t seem to be garnering interest anywhere, as Ian Rapoport of NFL.com says Cutler’s name “rarely, if ever, comes up” during discussions with head coaches and general managers regarding quarterback openings. Following the Jets’ recent signing of veteran Josh McCown, Rapoport indicated New York — unsurprisingly — was no longer an option for Cutler, and also signaled the Texans were similarly disinterested in the former Bears quarterback.

The possibility of a Cutler retirement is still on the table, per Rapoport, confirming a scenario that was first floated in February. While Cutler may wait for an injury to occur that would enable him land a starting job, he might simply be forced into hanging up his cleats. If no team reaches out with sincere interest, an involuntary retirement could be on the table.

Kaepernick, meanwhile, hasn’t been linked to any clubs as of yet, and his asking price may be a problem. While some reports have indicated Kaepernick is pushing for a starting gig and $9-10MM, that figure may not be entirely accurate. Still, some teams are apparently concerned about his vegan diet and his commitment to football, which — in addition to his recent play and political beliefs — could limit his market.

At present, the Texans have just two quarterbacks — Tom Savage and Brandon Weeden — on their roster. If they don’t bring in a veteran passer, they could look to draft a signal-caller either at pick No. 25 or on Day 2.

12 comments on “Texans Still Not Open To Cutler, Kaepernick?”