Victor Cruz is starting to generate some interest months after the Giants ended his lengthy New York tenure in February. But the slot receiver is far removed from his best seasons, ones that occurred before multiple leg injuries sidetracked his career.

But there’s still a market for the 30-year-old wideout, probably on a short-term arrangement to see what the former Pro Bowler has left. Cruz met with the Panthers before the draft, but they went in another direction. The 2012 Pro Bowler also went on visits to discuss a potential role with the Jaguars and Bears last week, and the Ravens expressed interest as well. 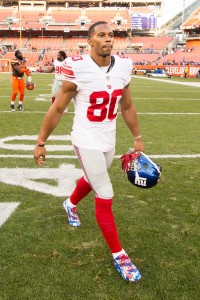 Here are some of the fits for Cruz as he attempts to re-establish himself on another team following the down years that marred the second half of his Giants tenure:

Which of these teams do you think would be the best fit for the would-be eighth-year veteran? Who did we leave off that you think would make for a logical destination? Weigh in with your thoughts in the comments section.