Unlike last year, there won’t be a drawn-out contract dispute between the Chargers and their first-round pick. The club has signed wide receiver Mike Williams, the seventh overall selection, tweets ESPN’s Adam Schefter. 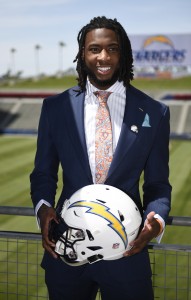 The 6-foot-4, 218-pound Williams thrived at Clemson, particularly during a 98-catch, 1,361-yard, 11-touchdown 2016 campaign that concluded with a national championship. He’s now in line to earn just under $20MM in guarantees on a four-year contract, including a signing bonus worth upward of $12.5MM, and join an impressive Bolts receiving corps that also includes Keenan Allen, Tyrell Williams, Travis Benjamin and Dontrelle Inman.

Ideally, the Chargers will get a full rookie season from Williams, which wasn’t the case with their first-rounder a year ago. The Chargers chose ex-Ohio State pass rusher Joey Bosa third overall in 2016, but he didn’t sign until late August because of an ugly contract battle. As a result, Bosa didn’t debut until October, though he still turned in an excellent rookie year with 10.5 sacks in 12 games.