Derek Newton wasn’t expected to be ready to play by the 2017 season, and the Texans made that official on Friday. The team placed its primary right tackle starter on the Reserve/PUP list to shelve him for the entire ’17 season, according to Field Yates on ESPN.com (on Twitter). The Texans confirmed the move. 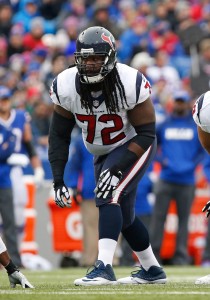 The veteran tackle suffered a brutal injury during a game in October 2016, tearing both his patellar tendons. He was unable to walk for a three-month period and will now spend this season rehabilitating in a possible effort to return to the field.

Three years remain on Newton’s five-year, $26.5MM deal. The 29-year-old started for four full seasons before suffering this rare setback, but it’s obviously uncertain as to whether the former seventh-round pick will be able to surmount this and return to his spot in Houston’s starting lineup.

The Texans still have veteran Chris Clark under contract, but in Newton’s stead last season, Clark rated as Pro Football Focus’ sixth-worst full-time tackle last season. Houston drafted Bucknell tackle Julien Davenport in the fourth round, but the small-school product profiles as more of a project than a player who could conceivably contribute quickly.