Free agent defensive lineman Devon Still is nearing full health as he recovers from an October Lisfranc operation, according to Ian Rapoport of NFL.com (Twitter link), who suggests Still “will have options” once he’s medically cleared. 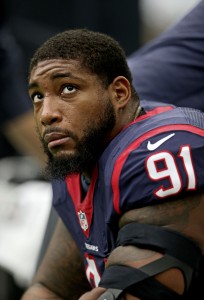 Still, 27, only played 25 defensive snaps for the Texans in 2016 before going down with injury. A former second-round pick, Still has never lived up to his draft billing, as he’s never started a game during his career due to health issues and lack of effectiveness. Of course, Still has dealt with plenty in his off-field life, as his daughter Leah battled cancer until announcing in 2015 she was cancer-free.

Capable of playing in a 3-4 or 4-3 scheme, Still is part of a free agent defensive interior group that also includes Sen’Derrick Marks, Jared Odrick, Dan Williams, Arthur Jones, and Vance Walker, among others.