The Redskins have submitted a proposal to the NFL to restructure their front office without hiring a formal general manager, according to Jason Cole of Bleacher Report (Twitter links). 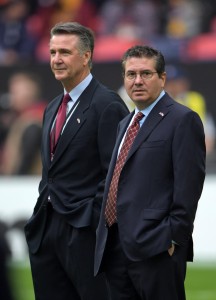 Team president Bruce Allen would likely remain in charge in a realignment, and probably would have retained final say even if a general manager were hired, as Jason La Canfora of CBSSports.com hinted on Wednesday. Allen was essentially running the Redskins even when McCloughan was in town, according to Michael Lombardi of The Ringer (Twitter links), as Allen — despite his title — was effectively Washington’s GM while McCloughan was the team’s head personnel man.

Washington has been operating without a GM since it dismissed Scot McCloughan on the first day of the free agent period. La Canfora reported yesterday that the Redskins’ “most likely course” would be to promote a general manager from within, while Mike Jones of the Washington Post recently identified senior personnel executive Doug Williams as a potential candidate to take over as the club’s top decision-maker.

Restructuring the front office without hiring a general manager clearly wouldn’t lead to a Williams promotion to GM, but it could conceivably involve new titles for Williams and other staffers such as scout Alex Santos and contract negotiator Eric Schaffer, as La Canfora suggested yesterday.

One comment on “Redskins Unlikely To Hire General Manager?”