Derek Carr and the Raiders have a new deal which will keep the quarterback in place through the 2022 season. We know that the new money average on the deal – $25MM per year – is an all-time record, but there are other factors which will dictate the true value of the deal. Naturally, the cash flow and nature of the guarantees will tell us a lot about how Carr did in negotiations, but his reps may have also structured his deal with the Nevada state tax code in mind, as Adam Schefter of ESPN.com tweets. 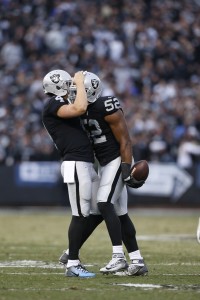 California’s state tax rate is 13.3%. Meanwhile, there is no state tax in Nevada. A backloaded deal could make a lot of sense for Carr and allow him to hang on to millions more in income.

We know that the Raiders plan to play their home games in Oakland for the 2017 and 2018 seasons. In 2019, the team could move to a temporary home in Nevada while waiting for it’s new home to be built, but it’s also possible that they’ll extend their stay in Oakland for one more year. It stands to reason that Carr’s team has opted for less money in the first two years of the new deal (’18, ’19) with a step up in 2020, when the new stadium is projected to open.

It’s not just Carr that will be thinking of the Battle Born State when negotiating a new contract with the Raiders. The same will go for any Raider in extension talks, including Khalil Mack, Gabe Jackson, and Amari Cooper, Schefter tweets.