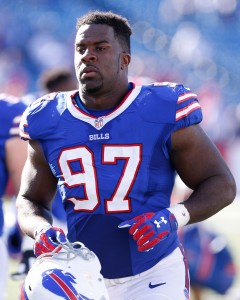 The 29-year-old Bryant brings a fair amount of experience to New York, having appeared in 56 games with the Steelers and Bills since entering the NFL as an undrafted free agent from Northwestern in 2011. Fifty-five of Bryant’s appearances have come in Buffalo, where he started in 16 of 24 games from 2015-16. Bryant missed half of last season, an eight-game, six-start showing, and received poor marks from Pro Football Focus for his performance. The year before, though, he saw action in each of Buffalo’s contests, piled up a career-high 45 tackles across 10 starts, and drew a positive grade from PFF.

Now, Bryant will attempt to catch on with a Giants team that lost starting D-tackle Johnathan Hankins to the Colts in free agency. Big Blue still has standout nose tackle Damon Harrison, of course, and used a second-round pick on former Alabama D-tackle Dalvin Tomlinson. Backups Jay Bromley and Robert Thomas are also on hand to offer some experience, but not as much as Bryant.

Holmes, who joined the Giants on a reserve/futures deal in January, has seen his career stall since the Colts cut him after the 2015 season. The 2013 fourth-rounder started in nine of 17 appearances as a Colt over three seasons.