The Broncos and John Elway have agreed to a new five-year contract, ESPN.com’s Adam Schefter tweets. The new deal ties him to Denver through the 2021 season. Terms of the deal are not yet known, but it is expected to make him the NFL’s highest paid GM (Twitter link). 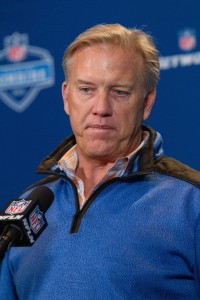 Elway, one of the franchise’s all-time great players, has furthered his legacy as Denver’s GM. Since taking over as executive vice president of football operations of the Broncos in 2011, the team has gone 67-29 in the regular season with five playoff appearances, two Super Bowl appearances, and a championship following the 2015 season.

“During these last six seasons, John’s clearly established himself as one of the best general managers in all of sports,” President and CEO Joe Ellis said in a statement. “He’s demonstrated impressive football instincts, a strong business acumen and a consistent ability to build competitive teams…There’s no doubt John means a great deal to the Broncos, our fans and the entire community. It was important for us to reach this long-term agreement, and we’re all excited to now turn our full attention toward the 2017 season.”

In total, Elway has won three titles for the Broncos – two as a player and one as an executive. The 1983 first-overall pick spent his entire 16-year career in Denver, and the Hall of Famer holds at least 30 franchise records. He finished his career with 51,475 passing yards (sixth all-time), 300 touchdowns (10th all-time), and 226 interceptions. Following the Broncos’ 2016 Super Bowl victory, Elway became the first person to win a ring as a player and as a general manager.

Since Elway joined the Broncos’ front office in 2011, the team has selected only three Pro Bowlers in linebacker Von Miller, tight end Julius Thomas, and cornerback Chris Harris (undrafted), although he did draft a number of capable NFL starters. Elway has seen the majority of his success in free agency, where he’s brought in a number of Pro Bowl veterans, including Peyton Manning, DeMarcus Ware, Aqib Talib and Emmanuel Sanders. This past offseason was highlighted by the hiring of Vance Joseph, who becomes the third head coach during Elway’s tenure (following John Fox and Gary Kubiak). The organization also signed running back Jamaal Charles and offensive linemen Ronald Leary and Menelik Watson.