Andrew Hawkins is walking away from football. The wide receiver announced that he will retire rather than continuing with the Patriots this offseason (Twitter link). 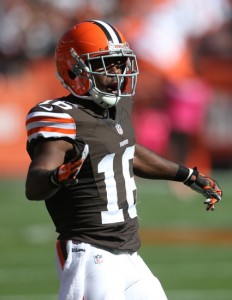 Hawkins signed a one-year, minimum salary benefit deal with New England this offseason, but he was facing long odds of making the final cut. Brandin Cooks, Julian Edelman, Chris Hogan, Danny Amendola, and Malcolm Mitchell are already locks to make the roster and the Patriots also have to have a sixth WR spot saved for special-teams ace Matt Slater. Hawkins reportedly passed up more lucrative opportunities with other clubs because New England was his top choice, but he’s opting not to circle back to those teams. Hawkins’ retirement leaves the Patriots with 88 players on their 90-man roster.

Until signing with the Pats, the 31-year-old had spent his entire career in the AFC North. After playing for the Bengals from 2011-2013, he hooked on with the Browns as a free agent prior to the 2014 season. Hawkins was initially a focal part of the offense in Cleveland, racking up 63 catches for 824 yards and two scores in his first season there. After that, however, his role shrank. In 2016, he recorded 33 catches for 324 yards and three scores.

Hawkins recently finished his MBA and he has always been comfortable being on camera. There will be plenty for Hawkins to do now that his playing career is through and he won’t necessarily be confined to football.