The Titans and defensive lineman Jurrell Casey have agreed to a whopper of an extension – a four-year, $60.4MM deal – according to Adam Schefter of ESPN (Twitter link). The contract includes $40MM in guarantees and, per Paul Kuharsky (on Twitter), will run through the 2022 season. 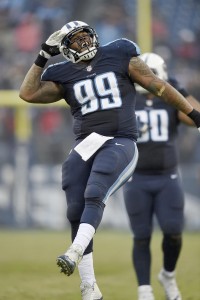 This is the second large contract Casey has signed with the Titans, who used a third-round pick on him in 2011. The ex-USC standout previously inked a four-year, $36MM extension with $13MM guaranteed back in 2014. There were still two years left on that pact, but given that Casey has continued to serve as a stalwart since then, the Titans elected to lock up the two-time Pro Bowler for the foreseeable future.

The 27-year-old Casey has started in 92 of 94 appearances during his six NFL seasons, and is coming off his fourth straight campaign with at least five sacks. He also tallied 44 tackles last year and finished 10th in overall performance among Pro Football Focus’ 125 qualified interior defensive linemen. He ranked in a similar vicinity to several defensive stars who have recently inked big deals, including Calais Campbell, Kawann Short, Fletcher Cox, Damon Harrison and Mike Daniels. Among those players, Casey’s deal is closest to the four-year, $60MM pact ($30MM guaranteed) that the Jaguars gave Campbell in free agency this year.

Casey led all Titans defensive linemen in snaps last season (724) and will continue to act as the unit’s centerpiece in 2017 and beyond. He joins cornerbacks Logan Ryan and Adoree Jackson, safety Jonathan Cyprien, linebacker Wesley Woodyard and nose tackle Sylvester Williams as Titans defensive starters who are under team control for at least the next three years.