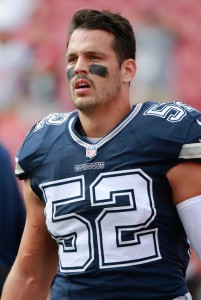 After finishing 23rd in special teams DVOA a season ago, the Jaguars are seemingly attempting to improve that ranking in 2017. In addition to hiring Joe DeCamillis as its new special teams coordinator, Jacksonville has signed a number of free agents whose primarily responsibility will come on fourth down. Audie Cole, Jeron Johnson, and Stanley Jean-Baptiste all fit that mold, and Gachkar joins them as a special teams-first player.

Gackhar, 28, has appeared in 95 career games but boasts only nine starts. Last season, Gackhar wrapped up a two-year stint with the Cowboys, and played in all 16 games but played only 75 defensive snaps. The former seventh-round draft pick was still highly involved, however, as he saw action on nearly 70% of Dallas’ special teams plays.

Even if he makes the Jaguars roster, Gackhar wouldn’t be counted on to play in the Jaguars’ defense, as the team has already bit up a good deal of positional depth this year. In addition to starters Telvin Smith, Myles Jack, and Paul Posluszny, Jacksonville has Cole, Josh McNary, Lerentee McCray, and fifth-round rookie Blair Brown on its depth chart.

Before signing with the Jaguars, Gachkar had met with both the Patriots and Bills.