Former Giants tackle Will Beatty is working out for the Jets on Thursday, a source tells Mike Garafolo of NFL.com (on Twitter). Garafolo adds that Beatty is a “name to watch for teams with tackle needs in the near future,” so it sounds like he might have a bit of a free agent tour lined up for himself. 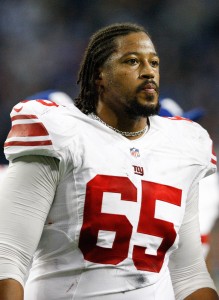 Beatty was one of the league’s more effective left tackles in 2014, grading as a positive contributor as both a run- and pass-blocker, according to Pro Football Focus. PFF ranked him 14th overall out of 84 qualified players at the position.

Unfortunately, a pectoral injury cost Beatty the entire 2015 season. And, in 2016, Beatty wound up appearing in only six games.

If Beatty is healthy, he may get an offer to serve as a reserve option behind projected starters Kelvin Beachum and Brandon Shell. Alternatively, the 32-year-old may look for a better opportunity to secure a second Super Bowl ring.

One comment on “Jets Looking At Ex-Giants OT Will Beatty”