The Bears have placed safety Quintin Demps on injured reserve after he suffered a broken arm in Week 3, the club announced today. 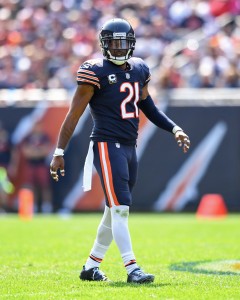 Demps is certainly a candidate to return from IR later this season, but that will first entail a minimum eight-week absence. As such, the earliest Chicago will see Demps in action again is Week 13 against the 49ers. While that’s not ideal, the Bears likely didn’t want to carry an unplayable Demps on their roster while he recovers. Chicago already have seven other players on IR, and while some of them — such as linebacker Jerrell Freeman — could potentially return in 2017, others (like wide receiver Cameron Meredith) have already been ruled out for the year.

Third-year pro Adrian Amos will be asked to step in at safety in the absence of Amos, and he offers plenty of experience. A fifth-round pick in 2015, Amos started 30 games over his first two seasons in the NFL, and graded as the league’s No. 26 safety last year, per Pro Football Focus. Amos will now start next to rookie defensive back Eddie Jackson, while Deon Bush and DeAndre Houston-Carson will serve as Chicago’s backups at safety.

Demps, 32, inked a three-year, $13.5MM deal that included $4.5MM in the spring after spending the past two seasons with the Texans. Through an admittedly small sample of only two-plus games, PFF had ranked Demps as just the 70th-best safety among 82 qualifiers.