The NFL announced Wednesday that it has suspended Texans linebacker Brian Cushing 10 games without pay for violating its policy on performance-enhancing drugs (Twitter link via Mark Berman of FOX 26). Cushing will be eligible to return to the Texans’ active roster Nov. 28. In the meantime, he’ll lose $4MM in salary and the Texans could attempt to recoup some of his signing bonus, per Field Yates of ESPN (on Twitter). 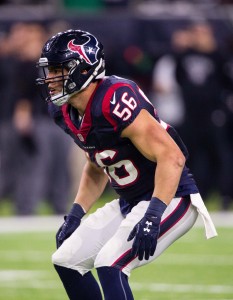 This is the second PED-related suspension for Cushing, a ninth-year man who served a four-game ban in 2010. Another such suspension would force Cushing to sit for at least two years, as Ian Rapoport of NFL.com notes (on Twitter). The 30-year-old is now in line for his shortest season since 2012, when injuries limited him to five games. Aside from that season and 2013, when he only suited up seven times, Cushing entered this year having played in no fewer than 12 games in any individual campaign. He has also started in all 100 career appearances.

While the former USC star has been a staple in Houston since it drafted him 15th overall in 2009, this suspension could give the team another reason to cut ties with him after the season. The Texans used a second-round pick this past offseason on a potential replacement, Zach Cunningham, as Sarah Barshop of ESPN.com tweets. Further, releasing Cushing would save the Texans $8.5MM and leave them with only $1.2MM in dead money in 2018.

While Houston will have an interesting decision to make on Cushing in the offseason, it has nearly a full slate to play before then. Already off to an 0-1 start after taking a beating from AFC South rival Jacksonville last week, the Texans will now have to go the next couple months without a key defensive starter (albeit one who has had a rather inconsistent career, according to Pro Football Focus). Along with Cunningham, possible in-house fill-ins include Brian Peters and Dylan Cole – two players who lack NFL track records as defenders.