Matt Jones is back on with the varsity team. The Colts have elevated Jones from the practice squad, as Adam Schefter of ESPN.com tweets. To make room, guard Ian Silberman has been waived. 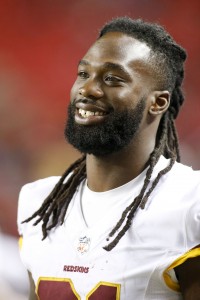 Jones was once primed to be the main ball carrier in Washington, but the Redskins informed him this offseason that he would not be a real part of their plans. He pushed for a trade out of D.C. for months, but a deal never materialized. Finally, on Sept. 2, the Redskins waived him, allowing the Colts to add him to the roster. He was dropped just prior to the season opener, but was quickly re-signed to the practice squad. Now, he’s back on the 53-man roster in advance of Sunday’s game against the Browns.

There’s no word yet on whether Jones will be on the active game day roster this week. But with Marlon Mack nursing an injured shoulder and Christine Michael on IR, he’s a good bet to dress. He’s expected to slot behind Frank Gore and Robert Turbin.