The Dolphins and safety T.J. McDonald have agreed to a four-year, $24MM extension, as James Walker of ESPN.com tweets. The deal includes $10MM in guaranteed money. 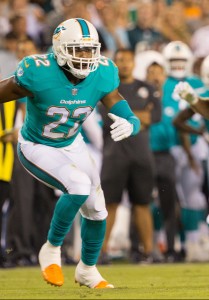 The Dolphins won’t get to see McDonald in live action for a while thanks to his eight-game suspension, but they have been floored by his performance thus far in the summer. He originally came to Miami on a low-risk, one-year deal, but the Fins have seen enough to warrant giving him a multi-year deal at a starter’s salary.

McDonald was a longtime starter for the Rams, but L.A. showed little interest in retaining him. His suspension didn’t come down until the end of March, but it seems that the Rams had some sense of the punishment that was coming his way for the DUI arrest and drug charges.

In 2016, McDonald had 62 total tackles, two interceptions, one sack, and six passes defensed. He graded out as as Pro Football Focus’ 58th best safety in the NFL last season. The Fins clearly disagree with the advanced metrics and see him as a much stronger player.

When McDonald is in uniform, the Dolphins will have a strong safety combo between him and Reshad Jones. In the interim, Jones will be paired with Nate Allen.