The Vikings are set to acquire cornerback Tramaine Brock from the Seahawks, according to Mike Garafolo of NFL.com. Minnesota will send a seventh-round pick to Seattle, tweets Ian Rapoport of NFL.com, and it’ll be a conditional selection in 2018, per Shawn Zobel of Zobel Sports Consulting (Twitter link via Adam Schefter of ESPN) and Chris Tomasson of the Pioneer Press. 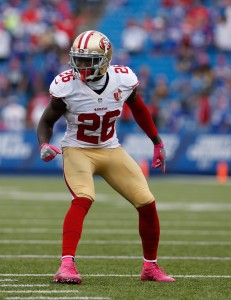 This continues an action-packed 2017 for Brock, who will join his third team of the year when the trade goes through. The 49ers released Brock in April on the heels of a domestic violence arrest, one that led to a felony charge, but the case was dismissed Aug. 9. As many as 12 teams – including the Vikings – then courted Brock, who joined the Seahawks on a $980K deal on Aug. 16. Seattle acquired fellow cornerback Justin Coleman from the Patriots on Friday, helping to make Brock expendable in the team’s eyes.

While Brock’s off-field incident damaged his stock, he has been a superb on-field performer at times during his seven-year career. As such, this looks like a worthwhile move for the Vikings, who were in need of a quality complement to No. 1 corner Xavier Rhodes. Brock will serve as one if he continues to post production along the lines of his recent output. The 29-year-old started in all 31 appearances from 2015-16, including each of the the 49ers’ 16 games last season, and has combined for nine interceptions since 2013. He picked off one pass in 2016, finished second among 49ers defenders in snaps (1,102) and graded a respectable 21st in performance among Pro Football Focus’ 110 qualified corners (Rhodes was 29th).