The 49ers made their second deadline deal in two days, this time agreeing to send cornerback Rashard Robinson to the Jets, Ian Rapoport of NFL.com tweets. The Jets gave the Niners a 2018 fifth-round pick in exchange, a source tells Manish Mehta of the Daily News (on Twitter). 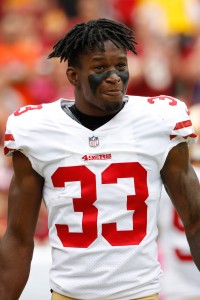 Robinson, a fourth-round pick last year, has started seven games for San Francisco this season. The Jets are hurting in the secondary presently, but the 22-year-old corner is under contract through the 2019 season. So, this represents a possible long-term piece for Gang Green.

The LSU product has started 13 games over the past two seasons. He’s deflected eight passes, forced a fumble and intercepted a pass during his sophomore NFL campaign. Robinson, though, ranks among Pro Football Focus’ worst-graded corners this season. This could be a short-term depth addition and a long-term developmental project.

New York is currently dealing with injuries to Morris Claiborne and Buster Skrine, making this an interesting way to go about patching up a secondary.