Austin Ekeler Out For The Year

The Chargers offense has many weapons, but perhaps the most surprising of the team’s playmakers will not be active for another game this season. Running back Austin Ekeler broke his hand in last night’s AFC West affair against the Chiefs and will be out for the year, according to Ian Rapoport of NFL.com (Twitter link). 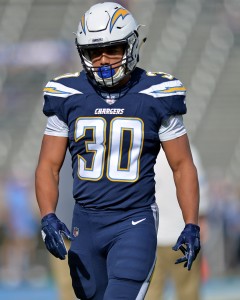 The undrafted rookie out of Western State had gone from unknown to a key part of the Chargers offense in a short period of time. Ekeler carved out a nice role as the team’s passing back when starter Melvin Gordon was off the field. The 22-year-old lined up all over for head coach Anthony Lynn, affecting the game both on the ground and through the air.

Ekeler averaged 5.5 yards per carry, rushing for two touchdowns. The scat back also caught 27 balls for 279 yards, which included three scores. Through 14 weeks, Ekeler ranked as the 16th best passing back in the league, according to Pro Football Focus.

Losing their surprise rookie performer is a rather big blow for a Chargers team that has been streaking over the past month with the hopes of securing a playoff spot. Expect Gordon to become even more involved in the Chargers offensive gameplan with Ekeler no longer available. Although, running back Branden Oliver seems like a sure bet to somewhat step in for Ekeler during the final two weeks of the season. Los Angeles is certainly not lacking weapons, but this injury puts another damper on the team’s postseason chances coming off a big loss on Saturday night.

One comment on “Austin Ekeler Out For The Year”