On Thursday, the Browns sacked top decision maker Sashi Brown with four games to go in the season. In his farewell address to Browns fans, Brown took the high road and also took ownership of the team’s poor performance: 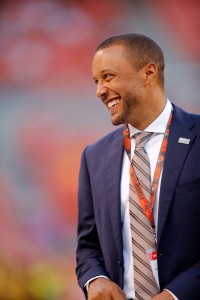 “I want this to be real and clear, the way I know Cleveland and Browns fans can appreciate: Our win-loss record since I became executive vice president isn’t going to cut it.

We worked hard. I am so grateful to the people I worked with throughout my four-plus years with the Browns, particularly the people I worked with the past two years. We embarked on a mission to rebuild the Browns for long-term, sustainable success. We were committed and aggressive in our approach, even if unorthodox at times. We made dramatic changes and put in place a foundation on which championships can be built.

Obviously, the Browns have not yet achieved the turnaround we wanted for a franchise and the best fans in the NFL, who deserve it more than any other in sports. I know that turnaround is coming.

I thank Dee and Jimmy and the rest of the Haslam family for taking a chance on me. And when that turnaround happens, wherever I am, I will smile – more than a little bittersweetly – and say, to myself, “Go Browns!”

Part of Brown’s unorthodox approach to team-building included a heavy focus on analytics. The team’s next GM may or may not follow in the same path, but we do know that Moneyball guru Paul DePodesta‘s job is safe – for now – along with Vice President of Player Personnel Andrew Berry. John Dorsey – who leaned on some advanced statistical analysis while with the Chiefs – is said to be among the early candidates for the vacancy.