In the spring, the Browns signed Kenny Britt to a four-year deal with more than $10MM guaranteed. After he was cut in December, the Patriots landed him for significantly less. 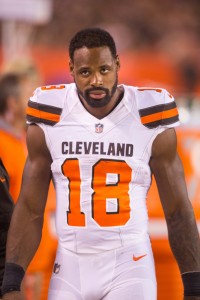 The Patriots are paying wide Britt a prorated portion of the veteran minimum ($900K) in the first year of his deal, Adam Schefter of ESPN.com tweets. After that, he’ll earn $1.5MM in 2018 year with a chance to reach to $2MM through incentives. However, the second year of the deal is a team option. If Britt does not perform, the Patriots can put him back out on the curb before next season.

Britt’s attitude and work ethic were an issue in Cleveland, but his contract with the Patriots is about as low-risk as it gets. If Britt can play up to even half of his potential without causing a locker room disturbance, he’ll be retained for next year on the cheap. If he causes headaches, then the Patriots can move on without any financial penalty. There’s always the chance that the temperamental wide receiver could mess with the team’s culture, but the Patriots had no such issues when they claimed Michael Floyd off of waivers nearly one year ago today.

Britt’s first opportunity to suit up for the Pats could come this Sunday against the Steelers.