Veteran middle linebacker Brian Cushing missed the first ten games of the regular season after being suspended once again for violating the NFL’s performance-enhancing drug policy. The Texans had placed him on a roster exemption list last week, but has now activated him to the 53 man roster, according to Aaron Wilson of the Houston Chronicle. Wilson adds that Cushing is likely to be active for the team’s Week 14 matchup against the 49ers. 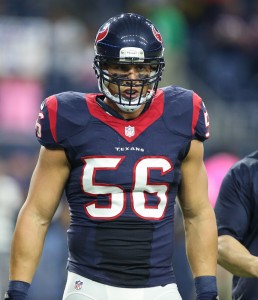 Head coach Bill O’Brien seemed to be excited about getting one of the leaders of his defense back.

Cushing, 30, has known no other franchise than Houston since he was drafted by the team in the first round back in 2009. Since then, Cushing has played a full 16 games in a regular season just three times, having been suspended once prior for four games in 2010.

However, when the linebacker is on the field, he’s frequently around the football having led the team in tackles twice in his eight previous years in the league. Cushing appeared in 13 games last season, collecting 38 solo tackles in the process.

The Texans defense has taken multiple hits throughout the year, losing two of the best defenders at their position in J.J. Watt and Whitney Mercilus for the season. Cushing will likely take the place of Zach Cunningham and start next to fellow inside linebacker Benardrick McKinney on Sunday.