One of the top quarterback prospects might stay in college if he’s forced to play for the Browns. ESPN.com’s Adam Schefter reports that UCLA quarterback Josh Rosen prefers to play for the Giants over the Browns, and the prospect will be hesitant to come out in next year’s NFL draft “if Cleveland planned on taking him with the top overall pick.” 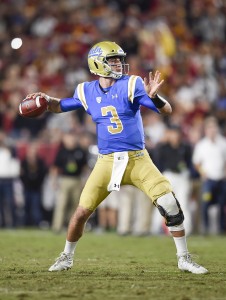 Rosen has reportedly expressed concern about landing in Cleveland, and he’s stated a desire to land with a more stable organization. Still, if the UCLA signal-caller is in the draft, Schefter notes that Browns general manager John Dorsey wouldn’t be dissuaded “from taking the player he believes is the best fit for his franchise.” Rosen will ultimately sit down with his parents following the Cactus Bowl to make a decision about his future, and Cleveland’s spot atop the draft could ultimately influence his decision. The Browns can clinch the top pick in the draft with a loss against the Bears today.

Rosen, a junior, is having another productive season in 2017. The quarterback has completed 60-percent of his passes for 3,670 yards, 23 touchdowns, and 11 interceptions. The prospect sits atop several draft boards, with ESPN’s Mel Kiper projecting him to be selected fourth overall and Todd McShay projecting him to go first overall.