Matt Nagy‘s staff is starting to come together. The Bears have hired former Oregon head coach Mark Helfrich to be their new offensive coordinator, according to Adam Schefter of ESPN.com (on Twitter). The Bears’ offensive scheme figures to be a mix of the west coast offense and the spread offense, Ian Rapoport of NFL.com tweets. That’s roughly the style that Nagy employed in Kansas City. 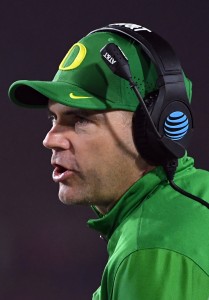 Nagy and Helfrich are both represented by agent and former Bears defensive lineman Trace Armstrong, which could explain how the two men came together.

Nagy will be charged with turning around a franchise that has sagged in recent years. The Bears went 5-11 last year and have missed the playoffs in ten of the last eleven years. The Bears’ last playoff berth came was in 2010.