The Broncos have a lot of work to do this offseason, but their checklist will not include finding a new offensive coordinator. On Tuesday, Broncos coach Vance Joseph told reporters that Bill Musgrave will become the team’s full-time OC (Twitter link via Ian Rapoport of NFL.com). This jibes with a report from Monday indicating that Musgrave and defensive coordinator Joe Woods will return. 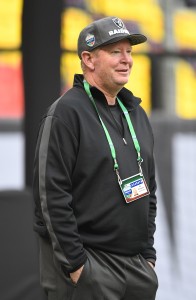 Musgrave was elevated to the position during the season after Mike McCoy was fired from the post.The Broncos went 2-4 after Musgrave took over play calling duties, but the hope is that the offense will perform a lot better next year with a different quarterback and other personnel upgrades.

Musgrave was the Raiders’ offensive coordinator in 2015 and 2016 before the team declined to offer him a new contract in January. Under Musgrave’s in 2016, the Raiders had the No. 6 ranked offense in the NFL. Last offseason, Musgrave rejected offers from other teams to be an offensive coordinator. His patience may have paid off as he is now the OC for one of the league’s most storied franchises.

3 comments on “Bill Musgrave To Return As Broncos’ OC”