The Browns have hired former Bengals offensive coordinator Ken Zampese, but he will not be Cleveland’s OC. Zampese has been brought in as the team’s new quarterbacks coach, as Mary Kay Cabot of Cleveland.com writes. 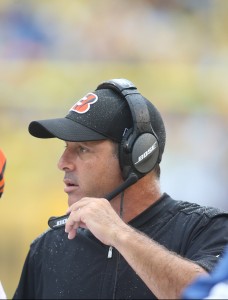 In one sense, it’s a step back for the coach who served as the Bengals’ OC up until his firing in September. However, the Browns are likely to use the No. 1 overall pick on a QB, so Zampese will have the opportunity to groom a talented young signal caller

A strong rookie season from the No. 1 overall pick (perhaps Sam Darnold or Josh Rosen) could put Zampese back in line for OC jobs next year. Sean Ryan, the Texans’ QBs coach, can attest to that. He’s in the running for the Browns OC position after guiding Deshaun Watson to a spectacular, though injury-shortened, year.

Prior to becoming the Bengals’ OC in 2016, Zampese spent 12 seasons as the team’s QBs coach.