As of Friday evening, the Giants were reportedly down to three finalists in their search for a new head coach: Josh McDaniels, Matt Patricia, and Pat Shurmur. This morning, however, we learned that McDaniels is expected to become the Colts’ next head coach, and Patricia is expected to take the Lions’ top job. Logic would therefore dictate that the Giants will do everything in their power to bring Shurmur on board as soon as possible (which could be tonight if Shumur’s Vikings fall to the Saints). 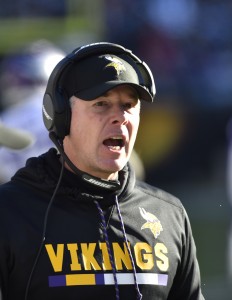 Indeed, Ian Rapoport of NFL.com tweets that, if Minnesota loses tonight, New York could move quickly on Shurmur, whose potential staff is already in place. But Big Blue could have competition, as Jason La Canfora of CBS Sports tweets that the Cardinals will also pounce on Shurmur if he becomes available this evening.

As La Canfora notes, Giants brass follows the letter of the law when it comes to rules concerning the hiring of head coaches whose teams are still in the playoffs, which makes it difficult to pin down New York’s true top choice (Twitter links). After all, Panthers defensive coordinator Steve Wilks is still very much in the running for the Giants’ job, per Rapoport, who adds (via Twitter) that Steelers head coach Mike Tomlin called the Giants last week to make a case for Wilks, who would be the first minority head coach in franchise history.

If they do not land Shurmur, the Giants could also circle back to Eagles defensive coordinator Jim Schwartz, who at one point was rumored to be the team’s top option. Paul Schwartz of the New York Post names Steelers’ offensive line coach Mike Munchak — who has also interviewed with the Cardinals — as a potential dark horse candidate for the Giants’ job.