Another top quarterback has declared for the draft. Louisville signal caller Lamar Jackson announced on Friday morning that he is going pro: 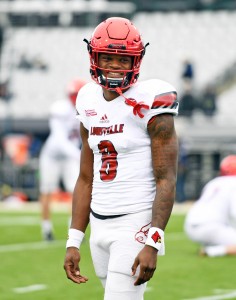 “For the past three years, the (University of Louisville), as well as the city of Louisville, has embraced me as one of their own. My time in Louisville has produced some of the best memories of my life. I have had the pleasure of being in the presence of some of the best professors, coaches, advisers, training staff, athletes and fans, in the nation. With their help I have been able to grow not only as a quarterback, but as a teammate, student, and most of all, as a man. After much discussion with my family and coaches, I have made the decision to take the next step in my career and enter the 2018 NFL draft. I would like to thank the University of Louisville, coach (Bobby) Petrino and the coaching staff, my teammates and the fans. It has been nothing short of an honor to be a member of Cards Nation and to play for this university. No matter what the future holds, one thing remains true: Go Cards!”

The inclusion of Jackson gives this year’s draft another big name at quarterback. He joins UCLA’s Josh Rosen, USC’s Sam Darnold, Wyoming’s Josh Allen, Oklahoma’s Baker Mayfield, and Oklahoma State’s Mason Rudolph as possibilities to be drafted in the first round.

Jackson’s resume is about as impressive as it gets. As a sophomore in 2016, Jackson became the first player in Louisville history to win the first Heisman Trophy. This year, he finished third in Heisman voting and wound up as the first underclassman to reach 9,000 passing yards and 4,000 rushing yards.

Still, Jackson is a polarizing prospect. He is not cut out of the typical quarterback mold and there are concerns about whether he will be able to stay under center at the next level. Any team selecting Jackson will need to have a clear plan in place for developing him, but the rewards could be astronomical.