Mike Mularkey is out of a job, but he should have plenty of employment options for the coming season. One possibility could be in Cleveland. This offseason, the Browns had interest in bringing Mularkey in as their new offensive coordinator if he ever became available, Ian Rapoport of NFL.com tweets. 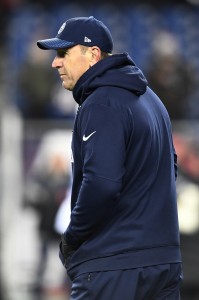 Under Mularkey’s guidance, the Titans went 9-7 in back-to-back seasons and reached the playoffs in 2017. Whether that’s enough to put him in the conversation for the league’s remaining head coaching vacancies, however, remains to be seen. If Mularkey cannot put himself in the mix for the Cardinals, Lions, or Giants jobs, his best bet might be to take an OC position for at least one season and try his luck next winter.

At first glance, the Browns OC job seems unappealing given that the team has gone 1-31 over the last two seasons. However, the Browns offer potential on a number of levels. With the No. 1 and No. 4 overall picks plus tons of cap room at their disposal, the Browns and new GM John Dorsey could position themselves as a winning team in 2018. Conversely, if the Browns get off to another slow start, someone like Mularkey could theoretically get a crack at the interim head coaching job with the potential to take over the post.

In December, Jackson admitted that he held off on hiring an OC because he did not want to saddle someone with a talent-poor offense. Now that the Browns are in (seemingly) capable hands, it sounds like he intends to bring one on staff.