Eagles quarterbacks coach John DeFilippo may be a candidate for the Vikings’ offensive coordinator vacancy, but it doesn’t sound like he’ll fly the nest this offseason. Sources believe DeFilippo will stay in Philadelphia, Ben Goessling of ESPN.com tweets. Meanwhile, Vikings quarterbacks coach Kevin Stefanski remains a strong candidate for the position. 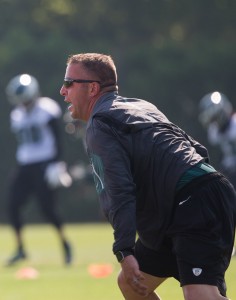 The Vikings are reportedly hopeful they will get a chance to speak with DeFilippo about their OC job once Super Bowl LII is in the books. The Vikings have taken longer to fill their coordinator vacancy than most other teams in the league and it’s possible that DeFilippo’s name is keeping things in a holding pattern. If DeFilippo turns down the opportunity to interview after the big game, we could theoretically see a hire made early next week.