Julius Peppers is leaning toward returning for a 17th NFL season rather than retiring, a source close to the Panthers defensive end told Scott Fowler of the Charlotte Observer. 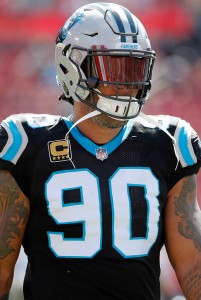 Fowler notes that the future Hall of Fame candidate has already undergone shoulder surgery this offseason and was believed to have played through the injury this past season. That wasn’t enough to stop the now-38-year-old from leading the Panthers with 11 sacks while fulfilling a part-time role.

A 2002 Panthers first-round pick, Peppers returned to his native North Carolina last year after spending three seasons with the Packers and the previous four with the Bears. Peppers has still been a reliable contributor despite approaching age 40. He’s appeared in all 16 games in each of the past 10 seasons while collecting at least seven sacks each year. Peppers also holds the Panthers’ all-time record for career sacks (92).

Peppers is set hit unrestricted free agency this offseason after signing a one-year, $3.5MM deal with the Panthers last offseason. The Panthers, who returned to the playoffs for the fourth time in five seasons, also have another key free agent on its defensive line in Star Lotulelei. Mario Addison and Charles Johnson represent the other key Panthers defensive ends under contract, though the latter might profile as a cut candidate.