The Lions made a big change on the sidelines this year, but they’re going to maintain stability in the front office. On Friday, the Lions announced an extension for GM Bob Quinn. 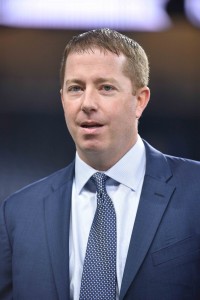 “The contract extension for Bob is most deserving as he continues to lead and improve our football team,” team president Rod Wood said in a press release. “It is also important for our entire organization to ensure stability as we move forward with Matt as our new head coach working in partnership with Bob. Moreover, I greatly enjoy my relationship and partnership with Bob. We both look forward to a bright future for the Detroit Lions.”

The team did not disclose the exact terms of the deal, though the announcement says that “the extension matches the term of head coach Matt Patricia’s new deal with the team.” It is believed that Patricia’s deal goes through the 2022 season, according to Dave Birkett of the Detroit Free Press (on Twitter). This through-2022 timeline matches Matthew Stafford‘s extension as well.

Quinn, a longtime scout/exec for the Patriots, was hired as the Lions’ GM in January of 2016. He made his first official head-coaching hire this week in appointing Patricia to the post. Predecessor Martin Mayhew hired Jim Caldwell, with whom Quinn worked for two seasons before firing him after the 2017 campaign, but the Quinn/Patricia partnership will be the biggest chance yet to gauge the current exec’s imprint on the franchise.

The Lions now have their quarterback, HC and GM in place for the long haul and will begin work on crafting a strategy aimed at ending a lengthy drought. Detroit’s most recent playoff win came in Barry Sanders‘ third season, 1991. Caldwell’s teams twice made the playoffs, with the 2014 Lions’ effort in Dallas coming closer to victory than the ’16 version did in Seattle, but postseason advancement has eluded the franchise for a generation.