The Browns added one of this year’s best available running backs in Carlos Hyde, but they haven’t ruled out selecting Saquon Barkley in next month’s draft, according to ESPN.com’s Pat McManamon. “Nobody is ruled out,” one source said of the Browns’ mindset. 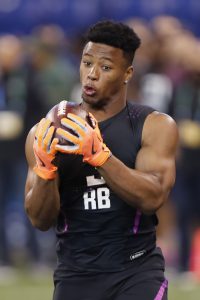 Of course, popular thought would dictate that the Browns will select a quarterback at No. 1 overall while addressing a different need at No. 4. By the time No. 4 rolls around, it’s likely that Barkley will be off the board.

Hyde inked a three-year, $15MM deal with Cleveland that includes $6MM in 2018. That’s a decent-sized deal, but the cash-flush Browns can afford to roster Hyde as the bottom half of a timeshare. That would be Hyde’s likely role, should the team go for the Penn State star.

The Browns still need to address their QB situation in the long term and one of their two top picks will almost certainly be used on a signal caller. But, if GM John Dorsey is ready to buck popular opinion and target, say, Baker Mayfield rather than Josh Rosen or Sam Darnold, he could get his man at No. 4.

The addition of Hyde was one of several to the Browns’ offense this offseason, joining quarterback Tyrod Taylor and wide receiver Jarvis Landry. With a short-term quarterback in place, the Browns could also elect to trade the No. 1 overall pick to stash selections while also taking a quarterback at No. 4.

The Browns may also target North Carolina State defensive end Bradley Chubb with the No. 1 pick. Cleveland already has four picks within the first 35 selections of this year’s draft.