CB Delvin Breaux To Visit With Packers And 49ers

The Packers and 49ers are set to host Saints free-agent cornerback Delvin Breaux for visits, according to Joel A. Erickson of The Advocate (on Twitter). The Saints had the option of extending Breaux a tender as a restricted free agent but elected not to. Erickson also reported (on Twitter) that the New Orleans native and LSU alum wishes to stay at “home.” 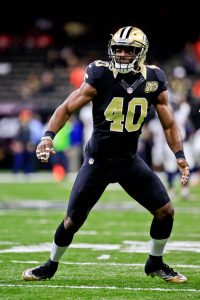 Breaux has already had visits with the Patriots and Broncos. The 28-year-old former CFL standout did not play last season after suffering a setback in his return from a broken fibula in 2016 that limited him to just six games.

The Saints signed Breaux from the CFL prior to the 2015 season and he graded out as a high-end starter in his first year in New Orleans, per Pro Football Focus metrics, starting all 16 games and tallying three interceptions. But he’s failed to recapture the momentum he built in his rookie year.

Reports had indicated that Breaux was close to a deal with the Broncos and was likely to sign with the team if he passed a physical before leaving the visit without a deal. The news of upcoming meetings with the 49ers and Packers points to Denver and New England likely moving on.

The Packers have brought back Tramon Williams but could still stand to add depth at cornerback after trading Damarious Randall to the Browns. The 49ers have already added a big-time cornerback this offseason in Richard Sherman and have Ahkello Witherspoon currently projected to start opposite of the former Seahawks standout.