The Colts hosted Bears restricted free agent Cameron Meredith for a visit, a league source tells Field Yates of ESPN.com (on Twitter). The Bears have the right to match any offer after using the low level tender on Meredith. If they do not match an offer sheet, they will not receive any draft compensation. 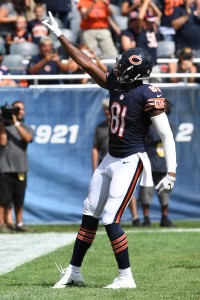 Meredith, 26 in September, missed all of 2017 with a knee injury. Before that, he had a breakout season for Chicago. In 2016, Meredith hauled in 66 receptions for 888 yards and four touchdowns. If healthy, the former undrafted free agent could be a big contributor for the Colts, Bears, or another team in 2018.

The Colts signed Ryan Grant on Tuesday, but their WR group is a bit thin outside of him and T.Y. Hilton. Donte Moncrief left to sign a surprisingly lucrative free agent deal with the Jaguars earlier this month, leaving Indianapolis with a clear need to fill in free agency or the draft.