The Colts have an agreement with free agent defensive lineman Denico Autry, according to Aaron Wilson of the Houston Chronicle (Twitter link). It’s a three-year deal worth $17.8MM in total and contains $6.5MM guaranteed. 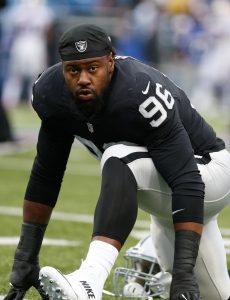 Indianapolis and general manager Chris Ballard have shown a willingness to invest in its defensive line over the past two years. In 2017, the Colts brought in free agents Johnathan Hankins and Jabal Sheard, and now they’ll add Autry to the mix.

While Autry may not be a household name, he’s been an underrated player for the Raiders over the past four seasons. Last year, the 27-year-old appeared in all 16 games (three starts) and posted 23 tackles and three sacks. For that effort, Pro Football Focus graded Autry as the No. 56 interior defender among 122 qualifiers.

The Colts haven’t made any other free agent moves this week, but they are clearly interested in defensive lineman, as they are reportedly targeting Benson Mayowa and Adrian Clayborn.