The Seahawks have at least one suitor for Earl Thomas. CBS Sports’ Jason La Canfora tweets that the Cowboys are among the teams with interest in the veteran safety. Of course, the reporter adds that Dallas is “hardly alone” in their pursuit. 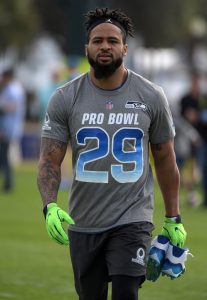 It sounds like the Cowboys would be the safety’s preferred landing spot. He connected himself to Dallas following a Seahawks’ win over Dallas, telling Cowboys head coach Jason Garrett to “come get me.” Thomas was also born in Orange, Texas and played at the University of Texas. Back in January, Thomas had threatened a holdout after pushing for a longterm deal. The safety signed a four-year $40 MM deal in 2014, which is set to expire after the 2018 season.

We learned earlier today that the Seahawks were seeking a first-round pick and a third-round pick in exchange for Thomas. Thomas, who will turn 29 in May, has earned six Pro Bowl selections in his eight seasons with Seattle. The safety had another solid campaign in 2017, compiling 56 tackles and two interceptions in 14 games (14 starts).