The Dolphins have reached an agreement with quarterback Brock Osweiler, a source tells Adam Schefter of ESPN.com (Twitter link). It’s a one-year deal, tweets Armando Salguero of the Miami Herald. 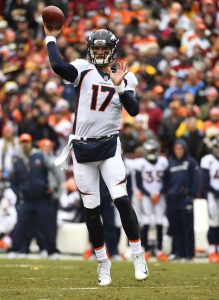 Osweiler’s new deal will reunite him with Adam Gase, who worked with Osweiler as Denver’s quarterbacks coach and offensive coordinator from 2012-14. In Miami, Osweiler will take the place on longtime backup Matt Moore, who was never expected to re-sign with the Dolphins. Other quarterbacks on the Dolphins’ roster include starter Ryan Tannehill, David Fales, and Brandon Doughty.

The 27-year-old Osweiler didn’t get a chance to start for the Broncos until after Gase had left the building, and the former second-round pick’s greatest NFL success came in a 2015 campaign where he started seven games for the eventual Super Bowl champions. It’s been a whirlwind for Osweiler since that time: he inked an ill-fated deal with the Texans, was dealt to the Browns, and spent the 2017 season back in Denver.

While the top tier of free agent quarterbacks came off the board fairly quickly, there are still a number of backup types available. Aside from Stanton, the list of No. 2 passers on the market includes Moore, Blaine Gabbert, Derek Anderson, Drew Stanton, and Geno Smith.