Patrick Robinson could wind up leaving the Eagles while staying in the NFC East. The Giants have interest in signing the free agent cornerback, according to a source who spoke with Eliot Shorr-Parks of NJ.com. 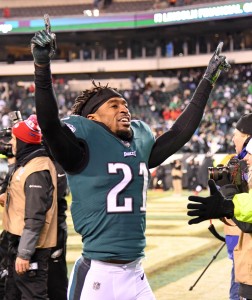 We learned over the weekend that the Giants are planning to move Dominique Rodgers-Cromartie from cornerback to safety, leaving a major void at nickel cornerback. Filling the gap with Robinson would be a major win for the Giants. The veteran graded out as the sixth-best cornerback in the NFL last season, per Pro Football Focus, and matched a career-high with four interceptions.

The Eagles, naturally, would like to keep Robinson, but the defending champs are placing a serious numbers crunch. The Giants are somewhat limited with just $23.68MM in cap space, but that’s far more flexibility than the Eagles have.

Free agency officially begins on March 14. Teams are permitted to contact agents of players set to become free agents on March 12, that is already happening across the league on the QT.