2:30pm: It’s not a done deal yet, according to Justin Rogers of the Detroit News (on Twitter).

12:50pm: The Lions have agreed to sign defensive tackle Ricky Jean-Francois, according to Jordan Schultz of Yahoo Sports (on Twitter). Ian Rapoport of NFL.com first reported that the two sides were working on a deal. 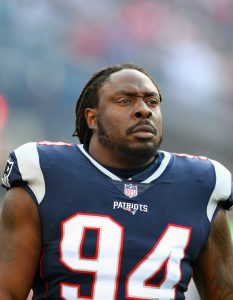 Jean-Francois comes to Detroit after spending last season with the Packers and Patriots. The 2009 seventh-round pick was cut twice by Green Bay and even dropped from the roster once by the Pats, but he was re-signed by New England and stayed with the team through their trip to the Super Bowl. All in all, he had 12 tackles in 12 games between the two clubs.

In a statement released by his agency earlier this month, RJ-F indicated that he hopes to continue playing for a few more years.

“I plan on continuing to play at the highest level,” the 31-year-old (32 in November) said. “Hopefully I made a strong case for myself this past season. I did absolutely everything I could to help the Patriots during my short time there, and I learned that playbook immediately. It takes a special type of player and discipline to do that so quickly. My priority right now is to find a stable home where I can step in and make a similar impact for a few more seasons before I ride off into the sunset.”

The Lions likely aren’t done adding to the interior defensive line. They have plans to meet with Johnathan Hankins and Alan Branch and former Titans defensive tackle Sylvester Williams is also on their radar.