Ohio State offensive lineman Billy Price suffered a partially torn pec while doing the bench press on Thursday, sources tell TomPelissero and Ian Rapoport of NFL.com (on Twitter). The good news is that the MRI results are in and a doctor tells Price that surgery is not required (Twitter link via Conor Orr of NFL.com). Price says he will seek a second medical opinion but, as of right now, he believes that he will not miss any time in 2018. 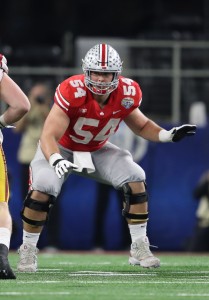 “I’m not worried about this at all. This is something where I’m gonna come back stronger,” Price said of his “incomplete” tear. “You’re gonna really have to put a bullet between us Ohio State guys’ eyes to put us down. So I’m looking to get back out there and whatever team ends up selecting me, we’re going to be 100 percent going into it.”

Price is one of the draft’s top offensive lineman and widely viewed as a first or second-round prospect. Depending on the news he receives from this point, he could still be in range for the top 64 picks.

Weeks ago, Lance Zierlein of NFL.com wrote that Price was expected to “crush the bench press at the Combine.” Unfortunately, what was meant to be a statement event for Price turned awry. Still, with accolades including the Big Ten Offensive Lineman of the Year award in 2017 plus All-Big Ten and/or All-American honors in each year from 2015-17, his future looks bright.